Over the last years there has been an exponential increase on investment in quantum technologies worldwide. The global effort for public funding has been boosted. It is an amazing and exciting time of innovation in this new second quantum revolution.

We have summarised the main programs and efforts around the world below. It is not a quantum race, it is a global ecosystem to develop the new quantum technology! 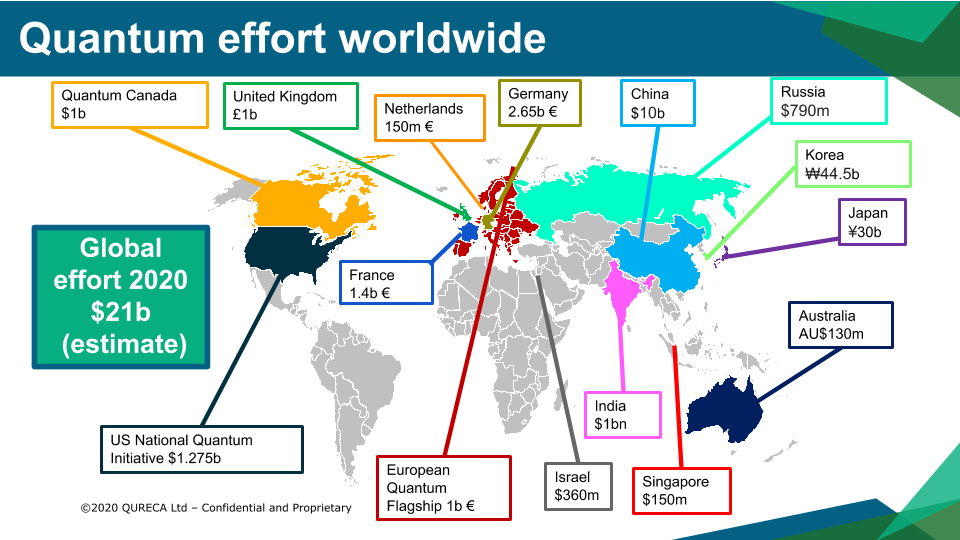 Australia has invested AU$130m through federal funding for the development on quantum technologies [15]. State-level governments have also provided continued investment.

In 2017, two new quantum-focused Centres of Excellence were established as five year programs. The first centre is FLEET (Future Low-Energy Electronics Technologies) located in Monash University [31] and the second centre is Exciton Science located in the University of Melbourne [32].

Australia has made significant progress in increasing the public profile of quantum technology, with CQC2T (Centre of Excellence for Quantum Computation and Communication Technology) Director Professor Michelle Simmons named as Australian of the Year for 2018 [15].

In 2007, the Singapore government helped to establish CQT (Centre for Quantum Technologies) that enlists physicists, computer scientists, and engineers to do basic research on quantum physics and to build devices based on quantum phenomena [16].

To date, the Centre’s researchers have published around 2,000 scientific papers, participated in projects winning over S$40 million in grants and established start-up companies. They have also trained over 60 PhD students in quantum technologies [17].

The centre is investing $25 million over 5 years in a new Quantum Engineering Programme [18].

There have also been other investments from grants and the QEP1 (Quantum Engineering Programme). This brings the total quantum expenditure to around S$150 million over the past 5 years [34].

Around a hundred years after the publication of revolutionary ideas from Einstein, Schrödinger, and others, Europe still retains the largest share in academic quantum output [24].

The European Commission allocated €1b of funding over 10 years to launch the  European Quantum Flagship [25] in 2018.

It’s main aim is to “consolidate and expand European scientific leadership and excellence in this research area in order to kick-start a European industry in quantum technology”.

The official Flagship document has been endorsed by over 3500 representatives from academia and industry, calling on the EC to invest in QT as a core future technology.

France invests €60 million in quantum technologies every year. The French government recently launched a a plan to structure a national strategy for quantum technologies, and estimated they would require €1.4 billion over the next five years to fund quantum research. They declared that the public sector alone cannot support this, and that the private sector will have to participate [26].

They recently announced the strategic recommendations for the 2020 plan [27]:

Read the full article from Qureca