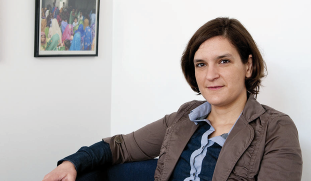 Find here the portrait published by the CNRS in 2011 when the economist received the CNRS innovation medal.

On this morning in March 2011, Esther Duflo broke into the Parisian offices of the European branch of the poverty action lab (J-PAL), an international network of researchers that she co-directs. The outfit is casual, the eyes sharp and focused. Between classes, conferences and meetings with the press, this young professor from the Massachusetts Institute of Technology (MIT) in Boston, a CNRS bronze medal winner in 2005, has not a minute to waste during her brief stopover in Paris. But her face lights up as soon as she gets to the heart of her matter.

The workhorse of this world-renowned economist? Development. This question is addressed by combining fundamental reflections and field work, with one objective: to provide practical answers. This is true in areas as varied as health, education, agriculture and access to credit. “As a child, I was already troubled by poverty,” she says. On the other hand, I wanted to be a teacher. “Esther Duflo chose to study history. But the trigger came when she connected to economy: “I discovered how to articulate my concerns and interests. »

In concrete terms, this former student of the École normale supérieure has made a name for herself by helping to bring the notion of experimentation in real situations, more precisely the so-called random assignment impact assessment method, into the field of economics. Example: How do we know if a tutoring program in India is working? “It should be implemented in half of the schools in a city, selected at random, not the other half, and then compare the level of students,” explains the economist. This is the only way to avoid the traditional biases resulting from a tendency of decision-makers to implement such programmes in the most disadvantaged schools. Or, conversely, a propensity for the best schools to solicit them.

Esther being interviewed by CNRS when receiving her CNRS innovation medal (video in French).

Even more innovative, the researcher, who inaugurated the first international chair “Savoirs contre pauvreté” at the Collège de France, refined the method to answer more subtle questions. It has shown that Kenyan farmers do not use the available fertilizer because, by the time it becomes useful, they have already spent the income from the previous harvest and can no longer obtain it.

“Economic logic would require them to anticipate this situation,” says Esther Duflo. Our experiments show that this is not the case. “These results feed into theoretical reflection on the real behaviour of economic actors and make it possible to devise strategies to encourage people to move towards greater efficiency. “This is just one example among many.

Because the methodological concepts of the J-PAL are now being implemented on all continents, notably through its offices in India, South Africa and Chile. Proof of their relevance are the many awards Esther Duflo has received, such as the John Bates Clark Medal, for her vital role in development economics. Or its ranking in the 2010 list of 100 global thinkers in the American magazine Foreign Policy. And today, therefore, the new CNRS medal: “I am delighted that social innovation is recognized on the same level as technological innovations,” the economist concludes.